So this is something of a surprise for triple A- free DLC. Free DLC isn’t entirely unheard of you understand, but this is the kind of thing that is usually overpriced and part of a season pass- new map, new weapon, new missions; the whole shebang. Now I do put the reason for the content being free firmly on the base game being released as a buggy, broken mess but it is still a positive gesture, and I was going to get it anyway so it all turned out fine. Assassin’s Creed DLC has a mixed history- AC II cut two chapters out of the game and then sold them back to you with reasonable quality, AC III had an alternate-history story in which protagonist Connor has magic powers and George Washington is King of America (I didn’t finish it but what I played was underwhelming) and ACIV had a neat little stand-alone story in which Adewale murdered slavers and freed captured slaves. I liked that one a whole bunch. So how does this one stack up? Can I even criticise it considering it’s free? I’ll answer that last one now- of course I can.

Set after the half underwhelming, half infuriating ending of AC Unity, “Dead Kings” finds Arno is the town of Franciade doing… something or other for the Marquis De Sade (mercifully a fetch-quest and not De Sade’s usual interests), and then he rescues a child and helps him find some sort of magic trinkets or something that eventually lead him to a piece of Eden. Whereas AC Unity’s story had some genuine potential and interesting themes that it diligently squandered Dead Kings has nothing of interest going on and maintains the same flat tone throughout. Why is Arno in Franciade? When did De Sade move there? Who the hell built a portable grenade launcher with an axe blade attached to it and why is there seemingly only one of them? None of these questions are answered- Arno just shows up, helps out an annoying, unlikable (there’s a surprise) child and that’s it- no real conflict, no development, just blandness and pottering about. The game also tries to make a big, dramatic reveal out of Arno declaring “I am an Assassin!” to the little boy despite the fact that (SPOILERS FOR THE MAIN GAME) Arno was decisively kicked out of the Assassin brotherhood for being a complete arsehole and murdering people without his superiors’ say-so (SPOILERS END), and Arno himself hasn’t become any less of a cocky, annoying twat since the main story.

Gameplay wise it has all the same issues as the main game only it has barely any assassinations in it (to its eternal credit) and contains a few new things (I hesitate to use the word “features” here. As generic as “things” is I can’t deny it fits the subject matter). Chief among them being the new “Guillotine gun” weapon- the aforementioned portable grenade launcher with affixed axe blade which, in practice, makes no real difference. The explosives are both inconsistent and generally underwhelming and the axe blade is fine but not as swift or as powerful as the sword you get for beating the game. A new enemy type has been included in the form of treasure hunter types who are piss-weak on their own but in groups become as difficult as regular enemies, and are all tied to a boss man who, if killed, causes every enemy linked to him to flee. It makes the combat quicker and easier so no complaints from me. The map itself is rather small but features a more extensive underground layer which is a nice touch, and a new lantern is required to clear dark areas and scatter cockroaches. Finally the DLC throws in some abysmal attempts at puzzles that are no more mentally taxing than “Here are some braziers. Light a certain four of them in a row based on a vague clue” that took me way longer than they should purely by being incredibly annoying and needless.

Overall “Dead Kings” is a mixed bag. If you’re desperate for more AC Unity or just want to unlock all of those enticing, locked weapon and clothing items included in the main game (some were included in the main game but informed you that Dead Kings was required to buy them) then by all means go for it- it is free after all. For everyone else this is a waste of time- the story sucks, the new inclusions don’t amount to much, and it just doesn’t bring anything interesting to the table. 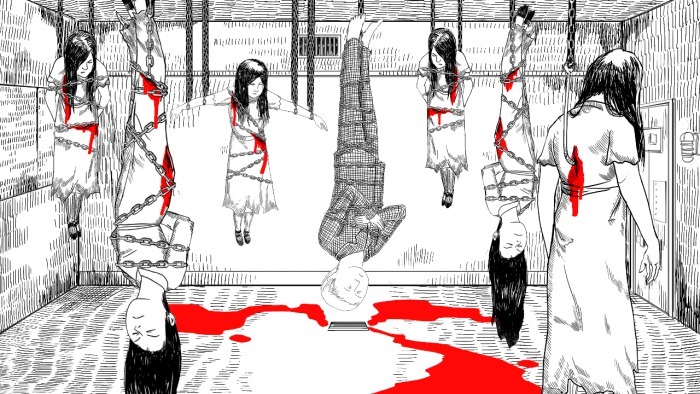 Starting 2015 with a horrifying stare into the dark core of the human psyche is a look at “Neverending Nightmares”, a game developed by Matt Gilgenbach and born out of his struggles with OCD and depression. This is a new one for me- I can’t think of a game I’ve played that so openly deals with its creator’s issues, and if nothing else it’s to be commended for the undeniably brave piece it is, and I feel compelled to thank Mr Gilgenbach for releasing it. It certainly doesn’t hurt that it’s also a damn good experience.

You are Thomas- a man who, as the title suggests, spends the game in a series of increasingly dire nightmares that he cannot escape from; waking into said nightmares repeatedly regardless of how many times he is killed or attempts to wake up. The other key recurring character is his sister Gabby, whose affect on the plot changes depending on the path you take through the story. The plot is quite simple and is told predominantly through imagery and context, and deals with issues that many people may find disturbingly familar; gruesome self-harm, anxiety based around children, the thought of being locked in an asylum, and the idea of having to protect (and spectacularly failing to protect) someone you love. Different people will get different results from the game, but I’m willing to admit that a lot of it rang true for me, and in one case actually alerted me to an issue I hadn’t ever really acknowledged until that point. The point is it’s imagery and concepts that will make most people feel uneasy in a “Silent Hill” sort of way, and as a horror game it’s very effective in that regard. The three different endings work well, but achieving them is down to being in a certain direction rather than criteria or skill- one of them I achieved by accident, while one was actually linked to a nicely symbolic choice. As seen in the image above the graphics are done in the style of black and white, 2-D line drawings which works beautifully, and the environment is utilised to great effect- exploring Thomas’ house, for example, sees the hallways and rooms become increasingly shabby and dilapidated, and one section involving running away from a swift enemy through similar-looking corridors and attempting to find holes leading down to the next area was genuinely tense.

Gameplay is rather simple- you move on a 2-D, sometimes 3-D plane avoiding monsters and occasionally interacting with plot items. There aren’t any puzzles except finding where to go next, but the simplicity of the game’s design works in its favour. Thomas suffers from asthma and as a result can only run for a few seconds at a time before he stops and breaks out into laboured pants like a chain-smoker attempting to chase Barry Allen, which means the majority of the time you’ll be taking things slow and as a result are entirely at the mercy of whatever the game throws at you. The atmosphere is heavy from the very start- the sense that something is very wrong but you can’t figure out what, and by the time you do it’s too late and no one is going to pull you out of this horrible situation because it’s a creation of your own tortured mind. But you push on, and are repeatedly rewarded with horrifying sights that are not for the squeamish. The only real problem is that the game is rather short, but it’s a very intense experience in a way similar to “Lone Survivor” (which I am planning to review soon) and doesn’t feel rushed.

The biggest problems I had were technical- I played the GOG version which had frequent sound-skipping, absent music and the screen cutting to black temporarily, but none of it interfered with the game too much.

Overall, “Neverending Nightmares” is a great example of a bleak, dark horror story very personal to its creator while being relate-able to other people. It’s graphically beautiful, its imagery is horrifying and its tone is spot-on: it’s not for the squeamish, and will have some disturbing sights for those with psychological issues of their own, but if you can handle all that it’s definitely worth a look.