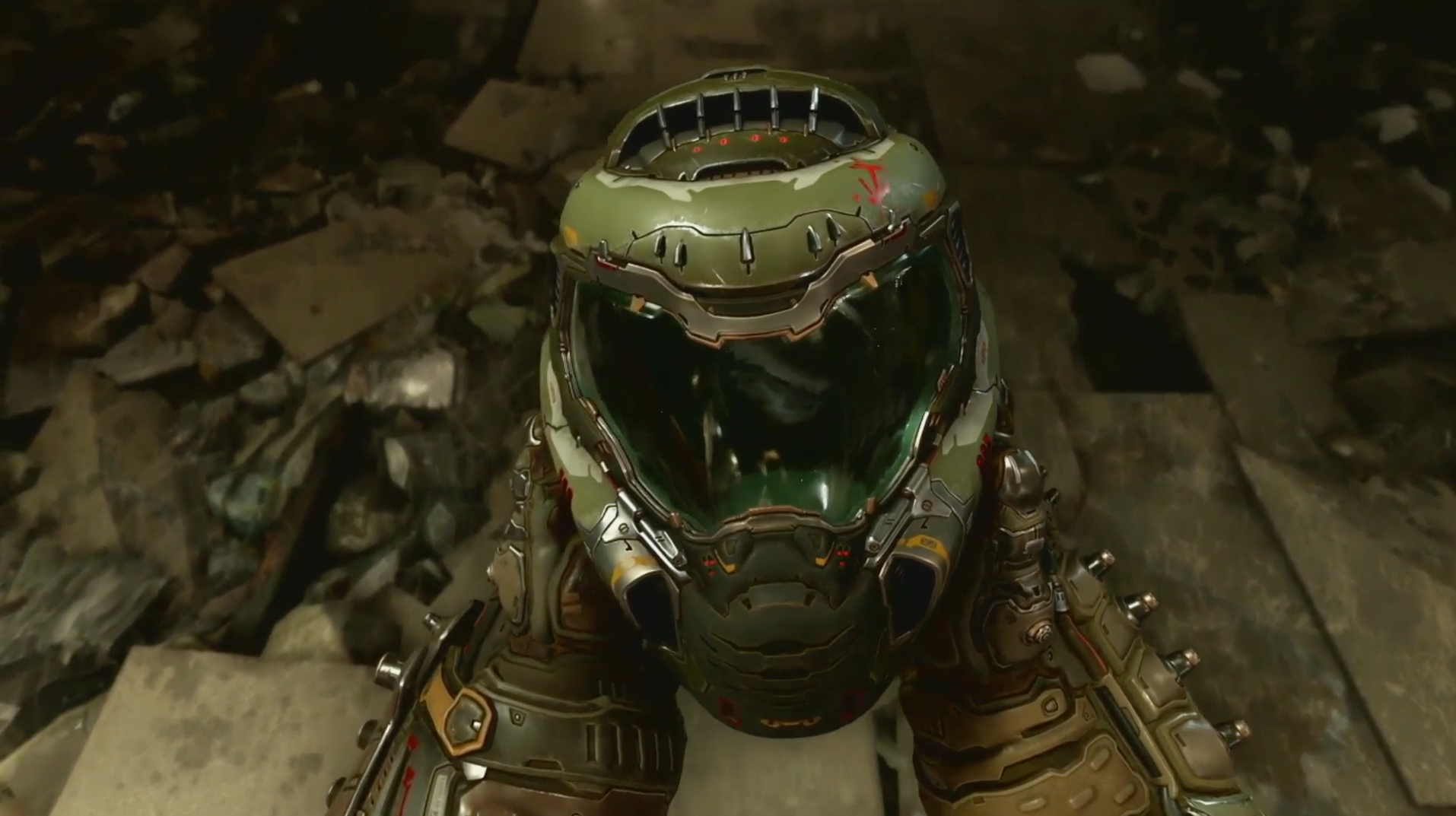 Well this came out of nowhere, at least for me. Maybe it’s because I don’t keep track of QuakeCon, and so had no idea this was coming, but either way: DOOM Eternal gameplay footage is upon us, and I’m going to talk about it. DOOM was great, I was pleased when a sequel was announced at E3, and QuakeCon provided a fair bit to get my teeth into.

Clearly having escaped wherever it was Samuel Hayden warped him to at the end of DOOM (unless of course that location was one of the two shown in the gameplay footage), The Doom Slayer is now kicking around on Earth and Mars’ moon Phobos, as well as a seen but unnamed third location. I reckon it might be his homeworld of Argent D’Nur, either before Hell took it, or maybe it was restored, or they didn’t get all of it. Anyway back to what’s confirmed: the Slayer has a new Praetor suit, with short sleeves, studded gauntlets, and a Predator style retractable arm blade and shoulder cannon that doubles as a flamethrower, used in conjunction with whatever weapon he’s currently using. Alongside a new Combat Shotgun capable of shooting timed mines and utilising a rapid-fire minigun-style barrel, existing weapons have been changed, chief among them being the Super Shotgun’s new grappling hook, to pull yourself towards enemies. A counterpart to the Doom Slayer has been teased in “The Marauder”, a huge demon wearing what appears to be bits of Praetor armour, and packing a Super Shotgun and laser axe, in the style of the Slayer’s own laser sword. Speaking of which, it makes a triumphant return at the very end of the footage, as the Slayer pulls it out to deal with what looks a lot like an Arch-Vile; an enemy from the old games with pyrokinesis and the ability to resurrect defeated enemies. He’s not the only old foe making a comeback: Arachnotron makes a glorious return, and this time its design makes a lot more sense from a mechanical standpoint: it’s a lot more sleek and streamlined, and can jump around and move more freely, rather than just shuffling around awkwardly until you mercifully kill it. They look a lot more nimble and swift rather than a lumbering tank that pumps out highly damaging projectiles, and so seems right at home with the lightning fast pace DOOM introduced.

Earth seems to be a sort of staging ground for planned Demon tourism: UAC holograms insist people welcome their new friends, and one kindly reminds anyone listening that “Demon can be an offensive term, please refer to them as mortally challenged”. So the UAC are STILL somehow trying to salvage this bullshit. After literally siphoning energy from Hell and starting a cult based around how great demons are last time around, they’ve now decided that Demon tourism is the way to go, and it’s resulted in an Earth covered in brain-textured meat moss and overrun by murderous creatures. I love it, it’s exactly the kind of boneheaded stunt this UAC would try and pull. What’s shown of Earth appears to be a downtown shopping district type thing, but there aren’t any humans around. Only time will tell if any survived, but it seems unlikely. On the other side of the scale we have Phobos; in a facility positively brimming with human beings who are all correctly in awe of/scared of the Doom Slayer, and his presence was expected to the point that a voice over an intercom informs everyone that “The Slayer has entered the facility” and later that “Slayer threat level at [is] maximum”. I picked the former for the title of this article because I think one of the most interesting things story wise is how the UAC folds all the supernatural stuff into the framework of a normal business, and despite being a legendary hero who’s wreaked untold havoc on the denizens of Hell, the UAC at large knows about the Doom Slayer and he’s apparently no big deal. The action on Phobos is more similar to the previous game but with daylight somehow present, presumably some sort of controlled artificial environment, as opposed to the facility in DOOM being surrounded by the cold, unfeeling vacuum of Space.

Gameplay additions abound: there’s a quick dash in any direction, even while in mid-air, which combined with the aforementioned grappling hook gives you more evasion options. There’s also the ability to climb certain porous walls, but that’s only shown to be useful to following the critical path. Presumably once it’s introduced and used a few times it will be mixed into the combat areas, but that’s just an estimate really. At one point the player picks up a massive glowing helmet and is informed that they have acquired an “Extra Life”, which caught me off guard. Presumably the game hasn’t switched to a “Lose all your lives and you’re back to the start” system, at least I hope not. I imagine it’ll be like gold orbs in Devil May Cry 3 HD- they’ll bring you immediately back to life, or you can go back to a checkpoint. Alongside this potentially major change is invasions: a new multiplayer element where other players can take control of demons in your single player campaign in an attempt to mess you up. It’s only touched upon briefly and wasn’t really shown off, but it sounds like a potentially cool idea. Moving on to smaller tweaks:  Enemies now take locational damage, with flesh, bone and the like flying off them in chunks when shot, and the glory kills now include the use of the arm blade, cleaving weaker enemies in half and such. Personally I feel it looks to lack the simple, brutal pleasures of ripping demons in half with your bare hands, but I suppose I can get behind it. That’s not to say they’ve slouched on the hand-to-hand stuff though; at one point the Doom Slayer punches a zombie so hard its head is shoved down into its chest.

Overall I’m looking forward to Doom Eternal, and I appreciate them not resting on their laurels and mixing things up. The new locations look good, the limited interaction between humans and the Slayer is pretty cute, and I enjoyed the lore of the original game enough that I am looking forward to seeing more of it. Hopefully this is all used in the way it should be: as a framing device for THE best first person shooting of the modern age, certainly of this generation. I’m glad to see it’s not just DOOM again, and I’m intrigued to see the story of the Doom Slayer uncovered further. Oh, and punch zombies heads down into their chests. RIP AND TEAR.