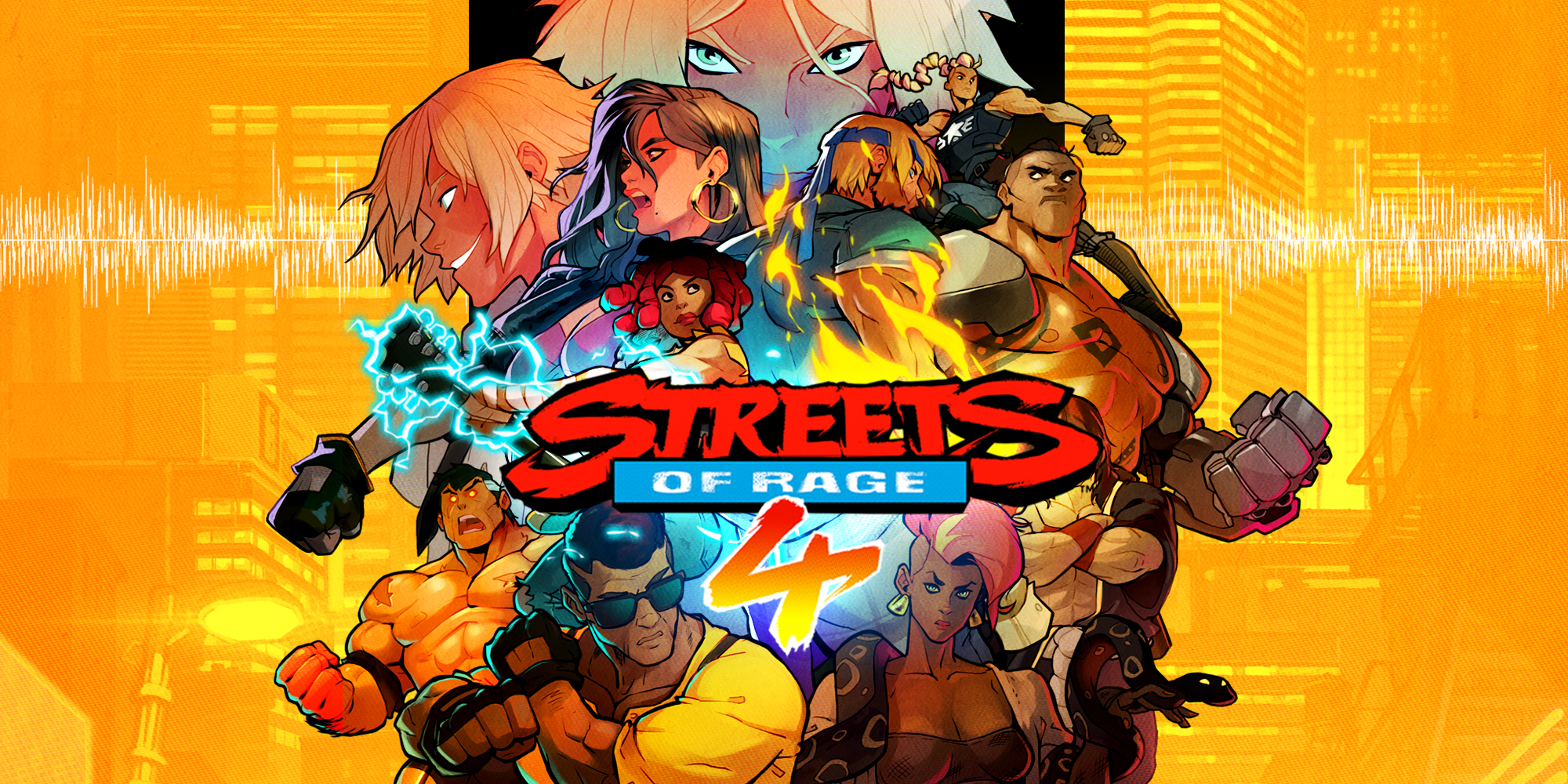 Sidescrolling beat ’em ups are a genre of games I don’t have a whole lot of experience with, but I do enjoy them. I loved Mother Russia Bleeds, I like the original Final Fight and I adored the Scott Pilgrim game back before it fell off the face of the Earth. I’ve been meaning to try River City Girls for a while now, but before that I decided to give Streets of Rage 4 a go: the latest instalment in a beloved series I’ve merely dipped my toes in before, with an art style that drew me in, high praise from Jim Sterling and a pedigree that offers a degree of safety.

Ten years after “Mr X” was defeated, his children; the white-haired, white-clad Y Twins are planning to control the minds of everyone in Wood Oak City, enlisting the help of a corrupt police force. A collection of brawlers stand in their way; ex-detectives Blaze and Axel (the two all-rounders), young rock star Cherry (the quick but weak one) and big, mechanical armed Floyd (the slow but strong one) with a fifth unlocking partway through: Cherry’s Dad and Axel’s old friend Adam (also an all-rounder). The story is kept entirely in voiceless slideshows between missions, but that’s all the game needs really, and the environments and enemies do a lot of the heavy lifting. The game’s aesthetic is a sort of 80s Cyberpunk type thing; there are robotics and high technology but they’re used sparingly, and there’s a definite layer of grime on most areas but they’re far from dilapidated. Oak Wood City feels like a place normal people live that’s also in the grip of a criminal empire. It’s vague enough to feel timeless but its aesthetic is familiar enough to enhance everything that’s going on. The art style is lovely, too; it’s an animated, cartoony art style with really sharp, high-res character models and a lot of detail on top of being bright and colourful. The locations vary from sewers, a police station and a cargo ship to an art gallery, a fight on top of a train and a jaunt through Chinatown culminating in a boss fight on a roof top terrace. It looks great, it sounds great, and it has that nice, simple beat ’em up plot of taking to the streets to beat up criminals until you get to their boss.

Gameplay wise, it’s quite a simple affair. You can do a combo, you can grab enemies by getting close to them and then attack, throw or slam them based on your position, which can be changed with the jump button. You can use weapons and you have three types of special move. Firstly you can double-tap a direction and attack, secondly you can press a dedicated button either by itself or with a direction, which drains your health but you can reclaim it by attacking enemies, Bloodborne-style, and finally you can use stars found in levels to use big, unblockable AOE supers. Unfortunately it doesn’t go for some of the modern conveniences found in other beat ’em ups; you can’t dodge or block; the only way to avoid attacks is to just move out of the way, either left or right or away or towards the screen. Cherry is the only character who can sprint, so everyone else has to slowly walk around to avoid threats, and the use of planes to dictate enemy placement means that I would often be swinging at an enemy, realise they weren’t on the same plane as me, try to move then attack but the game only recognised the second input so I’d just continue swinging in grand futility until the enemy in question jump kicked me. It’s frustrating, but once you get used to it it stops being a problem. It’s also eased by the combat itself being so crunchy and satisfying, even when you’re doing the same combo repeatedly. Also worth mentioning is the game’s approach to lives and checkpoints: you start with two in most levels and can earn more by reaching certain score milestones, both by picking up items and beating enemies. There are plenty of health pick ups, but there are no checkpoints; you die, you restart the level. This can be annoying if you’re stuck on a tough section or boss, but is mitigated by two factors: firstly most of the levels are short, secondly you can choose to restart the level at any time with more lives and starts in exchange for your score being decreased. As tough as things got I never had to take that option; I did get stuck now and then but it has that “One more go” quality that the best difficult games have.

So that’s Streets of Rage 4: frustrating at times, but a satisfying beat ’em up that looks great and is, crucially, fun to play.

UPDATE: Just quickly; one thing I forgot to mention and one correction to make. Firstly there’s an enemy type that holds a knife out in front of them and charges at you; they’re really annoying and there’s a room full of them in the chinatown level that’s utterly hellish. They don’t ruin the game or anything but they’re never fun to fight. Secondly I was wrong about there not being a dodge: there is one but only Adam can do it. I’d only played as him once so I’d forgotten, but as I write this I’m replaying levels, gave him a go and realised. So my bad.