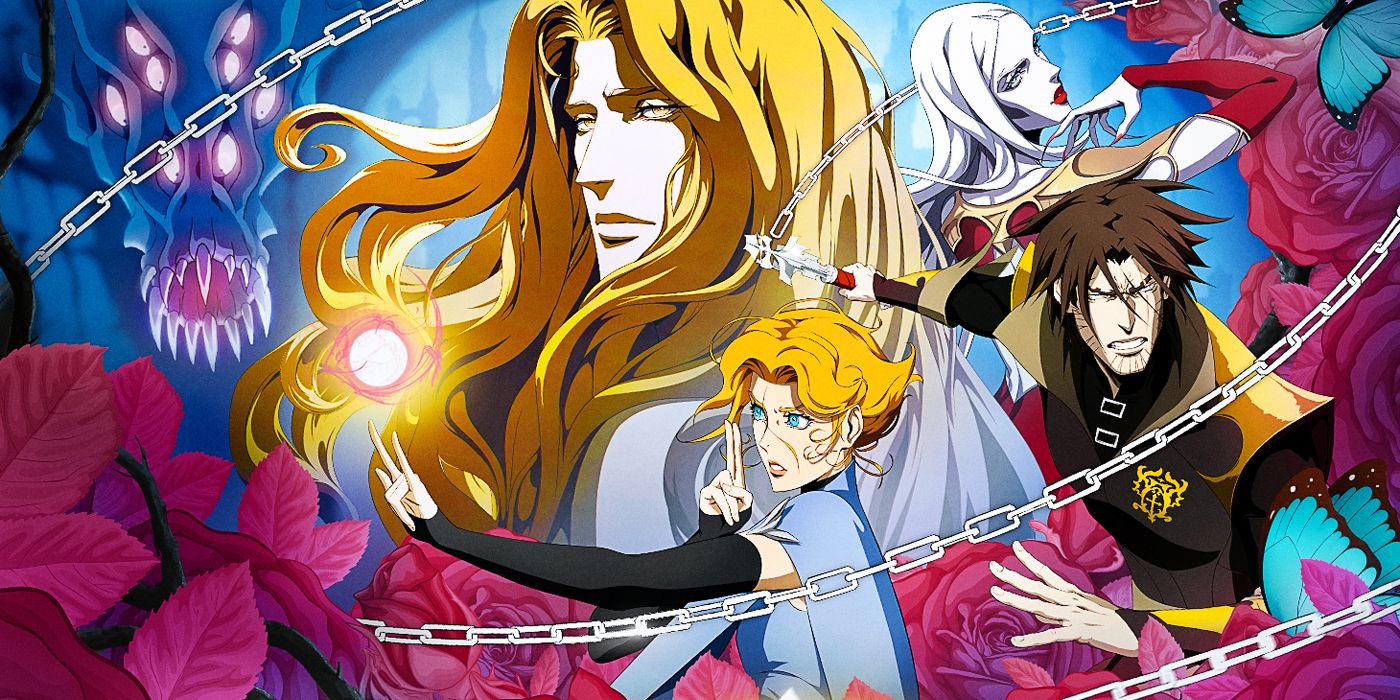 What’s a Castlevania series without Dracula? Really good, as it turns out. After two seasons dealing with Vlad Tepes’ quest for revenge against the human race for the death of his wife Lisa, the big man is dead and the key players have all moved on, for the most part. Sypha and Trevor (now a couple) have become travelling monster hunters and are, for now at least, staying in the town of Lindenfeld where a Scholar named Saint Germain is attempting to infiltrate a priory full of antsy, armed monks who worship Dracula after one of his creatures shared some kind of eldritch knowledge with them. Carmilla has taken the captured Hector to Styria where she rules with three other vampire women who she quickly convinces to militarily seize a huge corridor of land, lock it down and feed on its human denizens indefinitely. Isaac is making his way towards Styria to avenge Dracula after Hector and Carmilla’s unsuccessful betrayal and finally Alucard, having started to lose his mind due to living alone, takes on Japanese vampire hunters Sumi and Taka as students, forming a personal bond with them as well as bolstering their skills for when they return to rid their home country of vampires. Rather than separate stories that all convene on a single, unified finale, the stories are isolated from one another. This by no means a bad thing, as for the most part it gives each story room to breathe, allowing for some excellent character moments, particularly for the newcomers. Chief among them is Lenore; a member of Carmilla’s cabal who acts as a diplomat trying to win over Hector, and prides herself on a strictly give-and-take approach to negotiations which has some interesting, grim ramifications. Lance Reddick makes a brief appearance as a ship captain who gets Isaac to open up about his views on the human race and his place in Dracula’s plan to kill them all, reasoning with him that while humanity is complete shit, it’s not all bad and maybe wiping them all out isn’t the way forward. Isaac’s story has some nice introspective moments mixed in with the best action scene in the season, but it’s largely a transitional arc to get him into a confrontation with Carmilla’s group. I was pleasantly surprised to see how long Sypha and Trevor stay in Lindenfeld gradually dealing with the Priory with the help of Saint Germain’s sleuthing, leading to a pay off that, while slightly obvious, works really well, and both this and Isaac’s story have more appearances from game monsters, which is always a plus. Carmilla and her fellow rulers are largely in the background with Lenore taking centre stage, but it’s a role she absolutely deserves. It’s a slow burn over the course of the season, but it’s a good one. Unfortunately, Alucard’s story is the weak link. It’s not bad, but it wraps up a lot more suddenly than I expected, and while its climax doesn’t ruin what preceded it or anything drastic like that, it seems like a waste, and I would have liked to see it go on for longer, and do more with its potential

The writing and voice acting are as excellent as they have been in the last two seasons, though there seems to be less humour than before, maybe because Trevor and Alucard are apart. There also seems to be less gore, and less action in general, though the gradually unravelling plots, particularly in Trevor and Carmilla’s, are so engaging that you don’t notice, or at least I didn’t until it was over. Having set up a suite of supporting characters during the Dracula arc, the series is now focused on slowing down and developing said characters further while introducing new ones, which so far is working wonderfully. It’s due in large part to Warren Ellis; having taken a faithful adaptation of the series as a framework on which to lay his own approach to tone, dialogue and character development, resulting in a series that feels like both a Castlevania story and a Warren Ellis story, with unmistakable traits from both. While watching it I was thinking about how weird it would have sounded if I’d been told that Netflix was going to make a Castlevania anime full of English people, swearing, gore and humour, and that on top of that it’d be great, but here we are.

Overall, any worries about Netflix’s Castlevania series in a post-Dracula world are entirely assuaged by Season 3; taking its interesting characters and developing them in new situations while adding new ones that slot into the story wonderfully. Now I’m on the other side, the thought of keeping Vlad alive any longer seems like it would have spoilt things, and the show is all the better for having a dramatic, hectic journey to his end. Season 3 is confident in itself, rightly so, and the series shows no signs of slowing down. Despite the slight issues I have with it, it’s an excellent season and I look forward to whatever comes next.