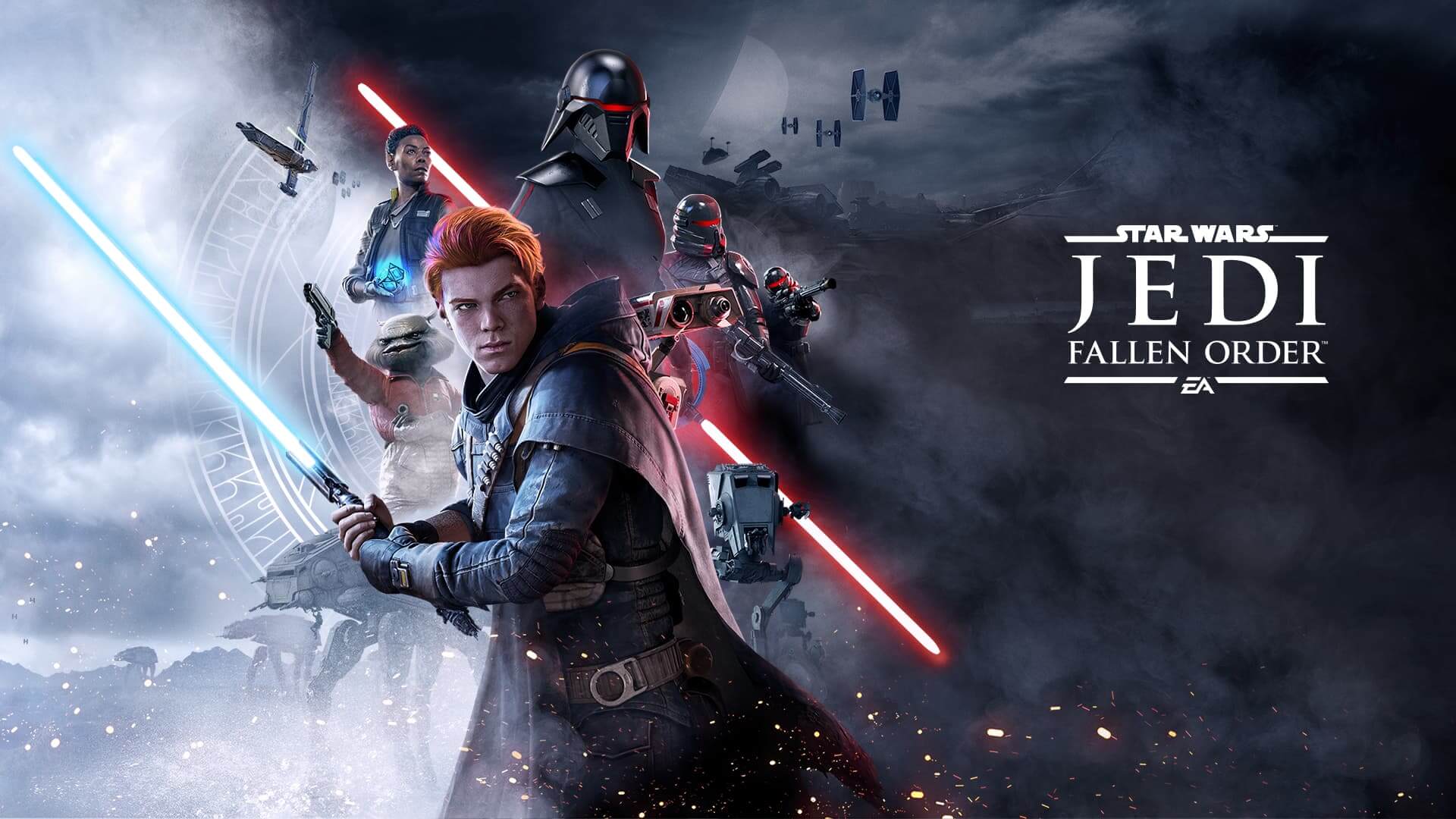 Having stirred up a shitstorm so diabolical that governments got involved with Star Wars Battlefront 2, EA wisely decided to go in the opposite direction and get Respawn (creators of Titanfall and, more importantly, Titanfall 2) to make a single player only, microtransaction-free Star Wars game.

Set between Revenge of the Sith and Rogue One, you play Cal Kestis; a young Jedi hiding out on a planet that’s one big eldritch monster covered in mouths, scrapping space ships and avoiding the Empire having lost his master to Order 66. Using the Force to save his friend from the aforementioned eldritch monster brings Cal face to helmet with the Second Sister; a brutal Jedi hunter and leader of a squad of black clad “Inquisitors” who do the same. Cal barely escapes with the help of pilot Greez and ex-Jedi Cere, who want Cal’s help retrieving a list of Force-sensitive children in order to train the next generation of Jedi. From there it’s a planet-hopping adventure following the trail of Cere’s master Eno Cordova, to the tombs of an ancient race of Force users called the Zeffo. The story is pretty solid all round, largely because the actual list of children is just a Mcguffin and the focus of the piece is on the characters. Cere has a troubled past is far more comfortable with the Dark Side than she would like, Cal has a deep well of guilt over his master’s death, and Order 66 happened when he was still a child so he’s had to basically raise himself into adulthood and this whole “Save the Jedi Order” thing is a pretty massive undertaking. Other characters you meet are struggling to fight back the encroaching Empire, who are still fresh but already doing their best to make everyone miserable. Spearheading this is the Second Sister, who has the use of both the Force and a double-bladed lightsaber, whose backstory I won’t spoil but both in terms of that and her design, she’s a strong villain. Personally I would have liked her to feature more, but you do get to clash with her on multiple occasions. She has a great reveal where she takes off her helmet, then hacks into Cal’s comms and taunts him for a while, but then Cal shuts her out and she’s placed firmly on the back burner until a lot later. The opportunities to encounter and fight cool, humanoid villains are definitely present but few, and unfortunately the game tends to fall back on fighting alien animals and monsters, which isn’t nearly as fun. However, the inquisition’s purge troopers act as minibosses dotted around the levels; strong, swift enemies with a variety of weapons that all pack a punch and different fighting styles. The story itself ends on a strong, satisfying note and that type of sequel hook that can be taken up or left, and fortunately doesn’t try to awkwardly cram itself into canon, apart from two cameos that in my opinion at least fit in fine.

I’ve heard two main comparisons in regards to Jedi Fallen Order: Uncharted and Sekiro. Now while I can sort of see where the former comes from, for me the game feels a lot more like the most recent God of War. Same Metroidvania gameplay, similar environment and art designs in a lot of areas, similar puzzles, that sort of thing. The Sekiro comparison is slightly more founded. Cal and enemies have block meters, once you’ve drained an enemy’s you can either kill them in one hit if they’re weak enough or get a clean hit in if they’re strong. That’s the only real similarity, because as we all know, blocking and parrying in melee combat have existed for years now, and the mere presence of them doesn’t suggest a Dark Souls inspiration. The combat has a definite weight to it but Cal is very quick and agile, has the ability to pull, push and slow down enemies with the Force and, crucially, the game has difficulty levels. They balance parry timing, enemy damage and enemy aggression, with the lowest having them all in your favour, the highest having them weighed heavily against you, and two inbetweeny ones. I started the game on the highest on recommendation, but restarted and then played the whole thing on one difficulty lower, which provides the best balance of the three criteria. The game can be tricky, and that block meter is definitely Sekiro-esque but for the most part it feels like a third person melee action game rather than a Soulslike. The Metroidvania elements are front and centre also; opening up new paths through the planets you visit, finding shortcuts, items and upgrades to traverse previously inaccessible paths. Oh it bares mentioning at this point, because I forgot to earlier and they’re responsible for a lot of the new path opening; Cal has a robot friend called BD-1: a tiny, two-legged droid with dog mannerisms that rides on his back, and they’re adorable. I love them. Baby Yoda can do one. The art design of the planets is nicely varied, ranging from things like ice, swamps and greenery to what’s basically a Mortal Kombat planet. It was surprising just how much Dathomir, birth place of Darth Maul, feels like Mortal Kombat. In a good way though.

Overall, Jedi Fallen Order is great. Enjoyable lightsaber combat, rewarding Metroidvania exploration and a strong Star Wars story with a focus on characters all make it worth playing. I had fun with it, and it kept me engaged from start to finish despite not being a particularly big Star Wars fan.