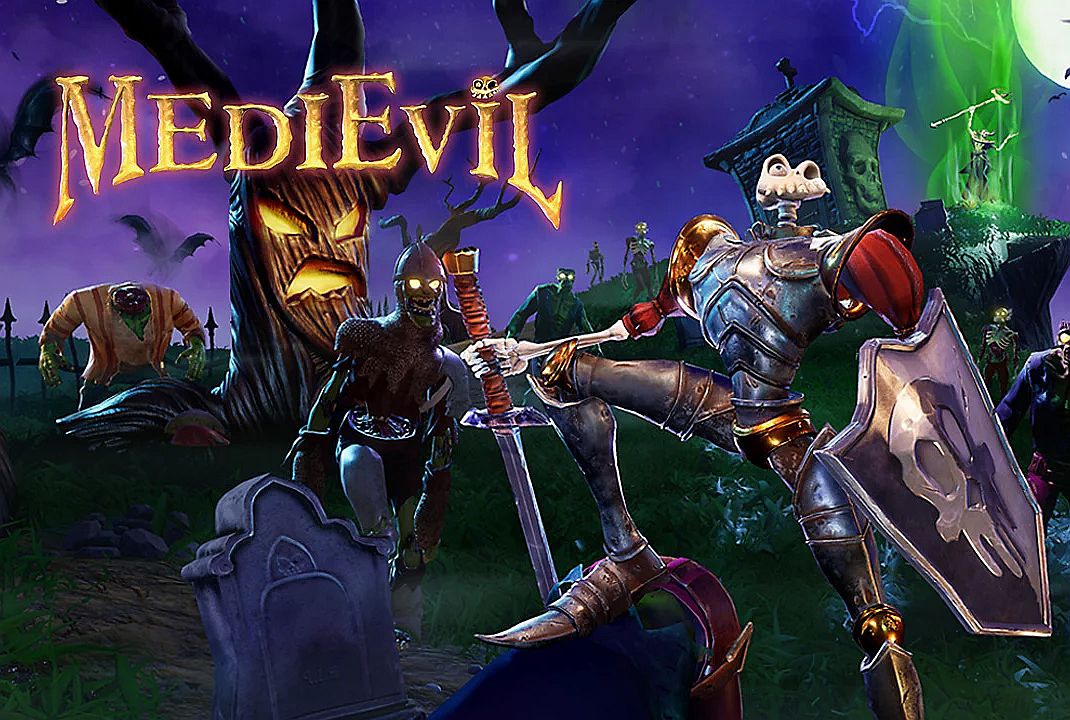 Back when I was a wee bairn MediEvil was one of my favourite games. A tone and level design that combined a light fantasy touch with a darker edge, Metroidvania elements and an exquisite soundtrack have all made it stick with me for years now. It was, however, bastard fiddly at times and I never finished it, instead using cheats to see the end, which is the 90s equivalent of “Time Saver” DLC, in a way. Anyway they’ve only gone and bloody remade it, haven’t they? Crash N Sane Trilogy style. I didn’t review that because it didn’t feel as good as the originals in a way that made me feel depressed and old and I wanted to just move past the whole thing. I am reviewing this, however. Join me, won’t you?

You are Sir Daniel Fortesque, renowned as the King’s Champion and hero of Gallowmere, who having lead a charge against evil sorcerer Zarok immediately died via arrow to the eye. Now revived as a jawless, one-eyed skeleton by Zarok’s general “Raise the undead and brainwash living people” spell, Dan’s got a shot at redemption by traversing Gallowmere and putting Zarok down. The story stays that simple throughout but is peppered with bits of lore now and then about sealed monsters, great heroes residing in a sort of Valhalla-type gaff and what remains of the battlefield Dan “fought” on. Dan doesn’t really have much of a personality to speak of outside of being worried or getting annoyed when people sass him, and the only recurring characters within the levels themselves are exposition goblins. Every now and then another character will pop up for a quick chat but they’re all brief: for the most part you’re on your own. The story itself is far less important than the journey, and fortunately that part is well done, and holds up. Every level has a gothic charm to it, the Kingdom being made up of ornate graveyards, moody farmland, eerie marshes and forests, as well as more unusual levels like a crystal cave and a flying pirate ship manned by a literal skeleton crew that comes out of nowhere near the end. The art design was one of the original game’s strongest suits, and it holds up well here apart from one slight personal issue I have with it. In the original, the lack of draw distance meant everything was surrounded by an endless black void. Here the entirely re-done PS4 graphics mean every outdoor level has a light night sky, which removes that slightly sinister atmosphere of isolation. The game looks lovely though; everything looks like it used to and the original, varied art style survives intact.

Gameplay wise is where things perhaps should have been changed a bit. The combat is light and floaty: there’s no real transition between moving and fighting. There’s a button that locks the camera behind Dan but it only works in certain areas, and another that locks Dan on rails so he’s always facing forward, but it’s on the same side as the shield button so it’s awkward at best. Mostly it’s just running around loosely, swinging wildly at any enemies with little sense of impact. There are a variety of weapons both melee and ranged, all of which are unlocked from the aforementioned Valhalla-style “Hall of Heroes”. Kill enough enemies in a level and you can collect its chalice, which lets Dan converse with a statue of a legendary hero who taunt or encourage him in a variety of accents and bestow upon him their signature weapon. Or cash. Or health, it varies. Each hero’s first time is always a weapon though. The game’s biggest issue, though improved since the original, is platforming, which being based on PS1 technology is often frustrating. As I said it is improved from the original but it can easily go wrong. As I said at the top of the review there’s a touch of Metroidvania to proceedings: the map used to select levels has branching paths, important story items are placed among them for reasons that make sense in the story but don’t really complicate proceedings. Admittedly I remembered where things were and I don’t know how someone going in blind would do, but it’s a fairly simple, well signposted game, with the Metroidvania elements just adding some spice really.

Oddly the game has a mixture of original and new voice acting, to equally mixed results. Some characters just straight up use the original recordings, albeit possibly remastered, which don’t match some of the new, more fluid animations. The one new piece of voice acting I’m not a big fan of is Dan, in particular a certain damage noise he used to make that’s now absent, but that’s a personal thing, and there’s nothing wrong with his new voice.

So then, as a big fan of MediEvil, I had a good time with the remake. For me its best points were always the art design and music, so the mediocre combat doesn’t really bother me, though it’s worth mentioning considering how far third person action has come in the intervening years. A pleasant trip down memory lane that didn’t make me realise I’ve been an idiot for liking such shite, but I’m not sure there’s enough here for a newcomer. Having said that, do please buy it so they’ll remake MediEvil 2.