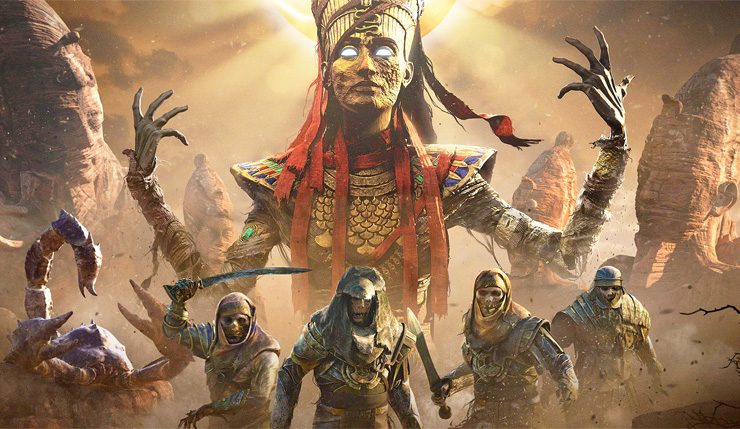 DLC time again, and we’re once again delving back into Assassin’s Creed Origins. Following on from the decent but underwhelming “Hidden Ones”, we have “Curse of the Pharaohs”; a huge, sprawling DLC in which Bayek trawls several different versions of the afterlife in order to put the kabosh on a curse involving revived Pharaohs. The trailer promised a supernatural bent involving giant scorpions and zombie/monster type enemies, but the final product is slightly different. While they do appear, the region the DLC takes place in is just a normal area really, apart from the odd monster attack. The real meat of the content lies in the aforementioned afterlife: several small pocket dimensions accessed through portals with their own visual style, design and enemies. One is a land of permanent sunshine, white structures dotted around in a large body of water and Anubis-headed guards everywhere. One is the field of reeds, bathed in dusk, with huge ships passing through them and vast stretches of open ground. One is a barren wasteland littered with corpses from a Pharaoh’s victory and the last a land of permanent twilight and huge, luminescent flowers. Visually the afterlives are lovely, and as the crux of the DLC they work well. Bayek’s mission to end the curse takes him on a rather lengthy journey in and out of all four, with each one’s corresponding Pharaoh as a boss, and a new mission structure, in which overarching missions are often put on hold until several smaller ones are completed. It doesn’t make much difference in the long run though, and it’s that same AC Origins gameplay I love so well. The only real issue is that of the bosses, particularly the final one: (SPOILERS) Tutankhamun (END SPOILERS). As you’re probably aware the game has a level system, in which enemies more than two levels higher than you do increased damage and take far less. The bosses, particularly the final boss completely ignore this; he was level 52, I was level 55, but suddenly he was a Dark Souls boss- dodgy hitboxes, insta-kill hits and cutting my health to ribbons despite me being several levels higher than him. It drove me up the bloody wall, made worse by the game unfortunately becoming really glitchy. I don’t know whether it’s my copy or Xbone, it did crash back to dashboard several times, but in-game the sound kept cutting out and characters would get stuck in mini-animation loops that would completely through off the cutscenes. At one point I spawned in an infinite void and fell for several seconds until I died. Regardless it did spoil several cutscenes and meant I had to have the sound turned off for quite a bit of it, which combined with the bosses left something of a bad taste in my mouth.

Despite that, there is a lot to commend about Curse of the Pharaohs. It’s more Assassin’s Creed Origins, the new locations are all great, there are loads of new weapons unique to the expansion, and for your money you get a whole lot of DLC, particularly compared to the rather short Hidden Ones. It also has a lot more plot relevance than I expected: it’s generally a bit of fun and throwing cool stuff in, but a lot of sidequests are tied into Bayek’s story and how he’s feeling now his life’s gone through such massive changes. For the most part I enjoyed the DLC, most of it was good fun and if you’re a fan of the game it’s definitely worth getting, it’s just also really frustrating at times.