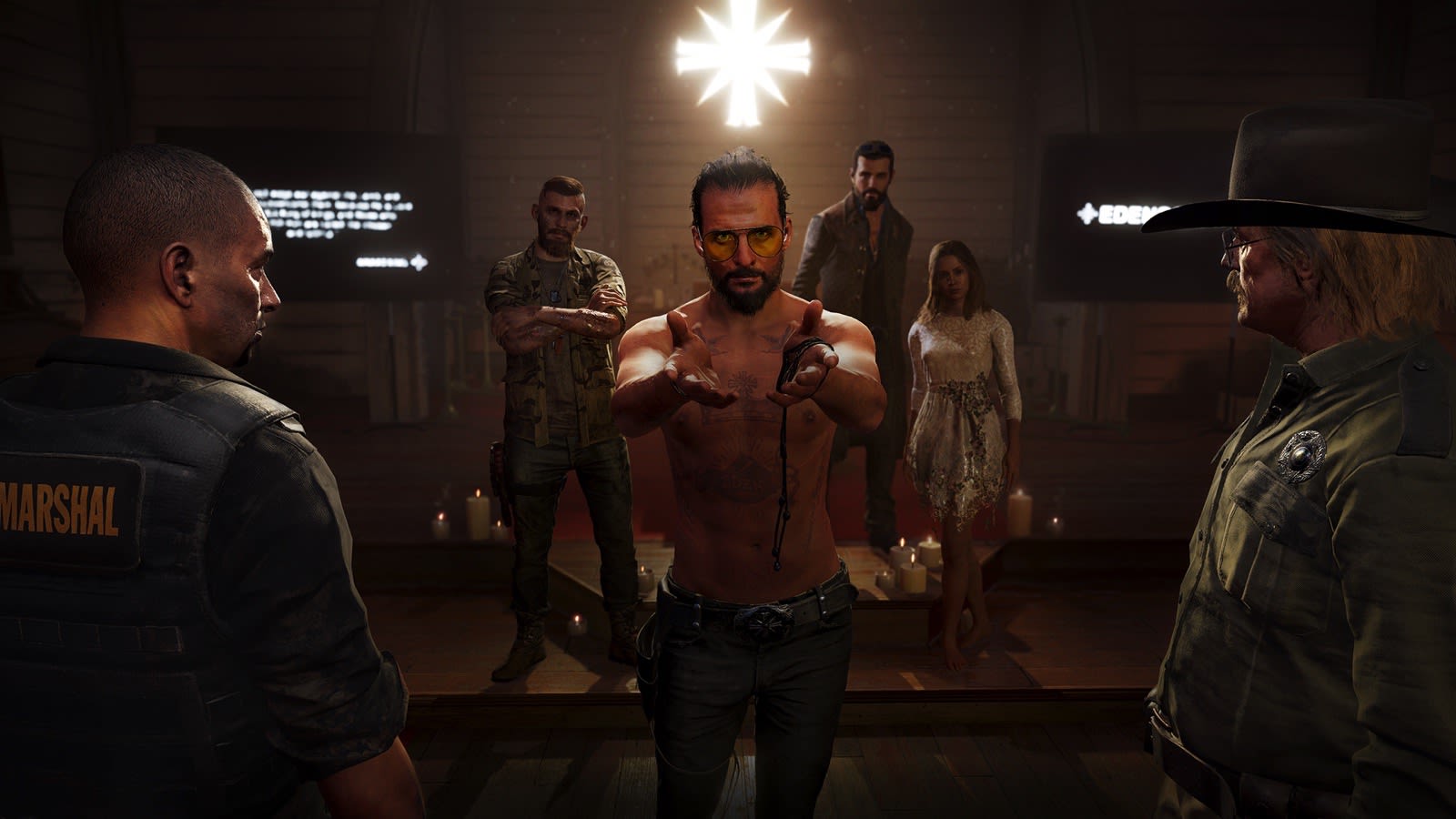 Far Cry is a series that, running counter to the usual M.O of both Ubisoft and “Triple A” developers as a whole, takes risks. Their stories place emphasis on the interaction between antagonist and protagonist, mixing things up and making things murky, with no easy way out and having to face some harsh truths. Far Cry 5 is no different, and if you intend to go into the game blind, which I recommend, stop reading now. I won’t be spoiling any of the frankly brilliant story, but I will go into some detail.

You are The Deputy, a customisable character of player determined gender and no voice who, along with four other people helicopters into the compound of Joseph Seed; “The Father”, leader of the “Project at Eden’s Gate” cult who, in an effort to save the residents of Hope County, Montana from an apparently incoming apocalypse have resorted to kidnapping. This goes about as well as you’d expect, with the nightmarish, incredible opening scenes setting the tone and showing a) how many people are in the cult and b) how rabidly, feverishly devoted they are to The Father. Most of the county are in the cult, either by choice or having been forced in through various methods; in order to free Hope from the clutches of Eden’s Gate and save your colleagues you’ll have to aid the small, but definitely present resistance. Hope is split into three sections, each with one of Joseph’s siblings in charge. First up, at least for me (though they can be tackled in any order) is John Seed, a sort of televangelist figure. He’s introduced in a hokey video, his mantra is variations on “Just say yes” and encourages people to own and endure their sins in order to overcome them, without any form of mind altering in a physical sense. Beneath that facade, however, is a thinly veiled, petty rage; he’s quick to anger, hates being defied, and what people are saying “yes” to is having one of the seven deadly sins tattooed to their chest, then having the skin sliced off. Jacob Seed, an ex-soldier, is engaged in conflict with a militia up in the mountains, implementing a hardcore, full-throttle, “might makes right” flavour of social Darwinism. You’re either useful, or you’re meat, and the way he makes people useful is music-based classical conditioning; ingraining into the subconscious a state of murderous rage that can be triggered at will by Jacob. Faith Seed, an ostracised young woman taken in as an adopted sister by Joseph, rules her region through an all-powerful drug called “Bliss”; exposure causes vivid, euphoric hallucinations tailored by Faith to endear The Father to those who resist his teachings. Too much exposure turns people into mindless beasts that attack you on sight. Top of the tree though, and best of all is Joseph himself, easily the best antagonist Far Cry has ever had. In defiance of the running trend of “crazy” characters with bold personalities and a flair for the dramatic, Joseph is calm, collected and genuinely captivating. He appears throughout the game to address you directly, either in person or in an isolated monologue; he speaks reasonably and shares what he sees to be the truth. He’s one of those “truly believes they’re right” villains, but done in a way that’s enthralling and enticing in a way I’ve never seen. Every time he appeared he drew me in. Every time he appeared I listened to what he had to say. The story of the Seed family is an excellent one, but I can’t go into any further detail without spoiling it (I’ll save that for another article), going in a vastly different direction for the series that pays off immensely.

Gameplay wise there have been a quite a few changes, unfortunately not all of them good. Enemies no longer drop saleable loot; only ammo, loose change and components for crafting thrown explosives . The only way to reliably earn money is through hunting and fishing, which is a pain in the arse if you need some quick cash for ammo and don’t have the time or patience to stomp around the woods looking for bears and wolves to kill with a bow. Hunting now only provides items for sale; any and all holsters, ammo pouches and the like are tied into the upgrade system, alongside new skills. Upgrades are now tied into challenges rather than XP, sort of like the new Wolfenstein games, meaning you have to go out of your way to unlock them. These two changes are the game’s biggest problems; having to go out of your way to get money, and having to decide between new abilities or even just increasing your max health, and being able to carry more ammo. It’s not all bad though: planes and full-size helicopters are usable now, the wingsuit and parachute are easily acquired, and driving is as enjoyable as it was in Far Cry 4. The biggest new addition is that of specialists; Guns and Fangs for Hire, letting you have two A.I controlled buddies with different skills help you out. They range from a sniper, an archer and a dog who snatches weapons from enemies’ hands to more exotic choices like a tame Grizzly Bear and Cougar. Among these specialists is series mainstay Hurk, who ties into the other problem I have with the game: its inconsistent tone. Now, for the most part Far Cry 5 is a pretty consistent game, but it sometimes it goes to extremes. Hurk, his GTA character Father and things like the “Testy Festy” mission represent the game’s silly, crass side. The story and its characters represent its dark side, and it gets rather dark at times. I don’t begrudge the game lightening things up, but the dark, haunting parts are more to my taste and, in my opinion better executed, and any time anything silly happened I kept thinking about that opening section and how the two didn’t mesh. Fortunately for the most part the tone is balanced well, and even when the game takes a lighter, more humorous approach it’s nothing the darker elements can’t handle. It’s just those few moments where it goes too far in that direction. Overall the gameplay is as good as it’s ever been, it’s just that some of the changes feel like a step backward despite trying to make things more streamlined.

Far Cry 5 is superb. Slight issues aside it’s that satisfying Far Cry gameplay (with no more radio tower climbing, I just remembered) with a fantastic story and characters, an enthralling, brilliant antagonist and what may well be the best ending to a video game I’ve ever encountered, certainly one of the best alongside MGS3. It has its problems, but everything else is so good they melt away and I just think back to how fantastic Joseph Seed is. An absolute home run for Ubisoft; this and Assassin’s Creed Origins showcase a developer at the absolute top of their game.