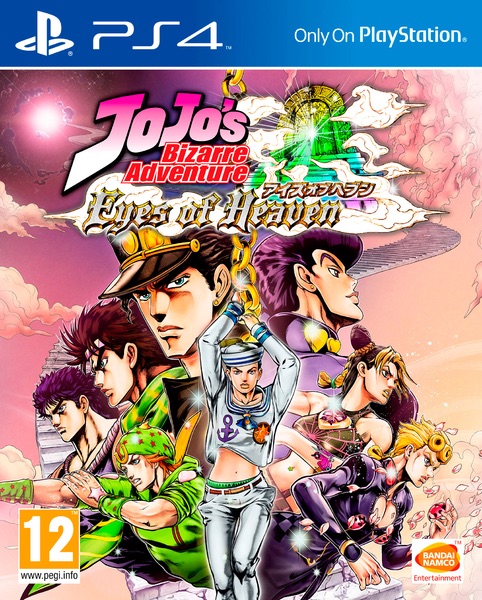 JoJo’s Bizarre Adventure is the best. If you’ve watched/read any of it then you know that already. If not then I assure you, reader, that it is indeed the best. If you’re in the latter camp I’m sorry to say this game isn’t for you; much like previous game “All Star Battle” it’s a decent if not particularly deep fighting game that’s carried by its sheer dedication to its source material and pleasing fans. The gameplay isn’t good enough to make it worth playing if you’re not a fan of the series, at least I wouldn’t say so. Feel free to stay for the review, though massive spoilers for its story follow. If you’re a JoJo fan and want a spoiler free review: yeah it’s good. Unlocking stuff is much less stupid this time, the combat’s solid and it retains ASB’s psychotic attention to detail in its references.

So unlike ASB’s terribly lop-sided, text-based re-telling of the manga’s plot EOH tells an original story featuring all eight JoJos teaming up to take out an alternate universe version of DIO who has a new version of The World that’s the most broken, OP, everything-proof shield Stand in the entire series. Think Gold Experience Requiem, King Crimson or Made in Heaven are OP? Well they don’t have anything on ZA WARUDO OVER HEAVEN, which can literally do whatever the hell it wants, as the plot requires. Officially its power is “Overwriting Reality”, but in practice it basically means DIO can change literally anything about any aspect of the world, with the most prominent usage being turning characters from throughout the manga’s run into his slaves. But that’s not too big a problem, right? The manga’s had characters with seemingly unbeatable powers, the anime’s showcasing one at the time of writing, surely this isn’t that different? Well yes and no. Yes the actual stand isn’t too bad, what’s bad is the way the story deals with it. See unlike in (SPOILERS FOR THE MANGA) Part 6, where a character with the ability to speed up time does so to the point where the universe resets and all the main characters bar one die, because logically there is no escape or counter attack (SPOILERS END), here DIO’s powers are overcome by Jotaro Kujo (the part 3 version), who has “The same type of Stand” as The World Over Heaven. Now at first I took this to mean “short range power type” like Crazy Diamond and arguably Stone Free, but what it actually means is “Star Platinum can also overwrite reality, a power Jotaro will pull out of his arse during the final battle, like he did with Time Stop in Part 3” This is the culmination of a story so obsessed with making Jotaro look cool and useful it’s basically bad fan fiction; people throughout the story comment on how good Jotaro is, at one point Jonathan Joestar insists that Jotaro is the only one who can stop DIO at the point where as far as everyone knows Jotaro’s offensive capabilities extend to punching things quickly. This is despite the fact that Giorno Giovanna is also there, and has been shown to still have use of Gold Experience Requiem. You can choose what character you use for the most part but the game will often default you to Jotaro, and he does the bulk of the work in cutscenes, even when dealing with characters unknown and unrelated to him. It’s not even the wiser, older Jotaro from Part 4, it’s angry young man Jotaro. The actual bulk of the story mode is just as irritating; go to a location from each part of the manga, beat DIO slaves, collect parts of the Holy Corpse from Part 7. OH NO! DIO took them all! Go get them back. Okay, ready to fight him? OH NO HE MADE YOUR FRIENDS INTO SLAVES AGAIN! It’s mostly repetition and beatings, with hardly any time given to the absurd character moments that can and do arise from this situation. It does have its moments though, like when both versions of Yoshikage Kira turn up and complain that they just want to lead a quiet life together but they keep being bothered, or when Old Joseph gets a chance to prevent Caesar from running off alone to fight Wham. The story is a wasted opportunity really- the one time every JoJo gets together and most of them barely get to do anything except get into a few fights and stand around cheering on Jotaro while he does all the work and forms a new timeline where every non-villain survives.

Whereas ASB was a one-on-one 3-D fighter, EOH takes a more open, arena fighter approach. Every match besides a few in story mode are two-on-two, which has its own problems as well as benefits. On the plus side different character pairings offer unique dialogue and super moves, on the other hand re-creating fights with fewer than four people is impossible (the game has the rooftops in Cairo and the Colosseum as arenas but DIO and Diavolo have to have partners) and if one character is defeated the other one gets a storable health boost instead of their super move, which is suddenly locked off. Said moves often miss because of their weird hit boxes and the fact that they’re all activated by sprinting full pelt at your enemy. The A.I is woeful; both partners and enemies will often just stand around doing nothing for long stretches, and I’d often notice that my partner had full health while I was nearly dead, because I had run in and engaged both opponents by myself while my partner stayed behind to pose (probably). Also the lip synching is terrible- an audio clip starts playing, the characters flap their gums in a way that doesn’t even try to match the rhythm of the speech then they stop when the clip ends. It does have definite plus points though. While some attacks don’t translate to the less focused combat, the more open style of play means that characters with stands other than rapid-punching big dudes are actually viable options now, and the way they adapt, for example, the respective powers of Gold Experience Requiem, King Crimson and Heaven’s Door are excellent. Also costumes, colours, win poses and the like are now unlocked with money earned in-game and can be clearly viewed before buying them and before selecting them. No more having to wait around until maybe a boss turns up, then fighting them over and over again hoping to unlock the outfit you want (but obviously you don’t) then you can’t even see them before you select them, as it inexplicably was in ASB.

Eyes of Heaven is a mixed bag. If Jotaro is your favourite JoJo to the point where you’re happy to see every other character besides the villains hype him up and rely on him to solve their problems like Alice in the Resident Evil films, then you’ll get a lot more out of the story than I did. The more open, less focused (not in a bad way) fights mean more of the large roster of characters are viable options and if you’re a JoJo fan then there’s more than enough here to enjoy, to the point where I can and do recommend it. If you’re not a fan, this won’t convert you, and personally I wouldn’t bother with it, but if you are, give it a look.